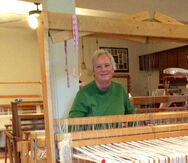 Ellen has been using fiber since she learned to knit at the age of 6. In 1983, she enrolled in her first weaving class at the Manchester (NH) Institute of Art where she studied for 3 years. Since then, she has attended many workshops, learning from master weavers in the US, Germany and the UK. During the early 2000s, Ellen tutored several new weavers while living in Tucson, AZ. When she and her husband moved to West Lafayette, IN, she discovered that there was considerable interest in weaving but nowhere in the area to learn. Under the auspices of the local YWCA, Ellen began Moss Creek Weaving in 2010.  In 2012,the studio moved to its own location in West Lafayette, and in 2018, it moved to Marstons Mills. The greatest joy she finds in her studio is seeing weavers of different abilities, from beginners to advanced, work together to solve problems and share each others successes.
​