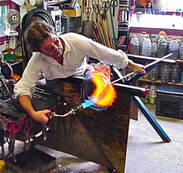 Michael Magyar runs the Glass Studio of Cape Cod in East Sandwich. He received a BFA in ceramic/sculpture from Washington University and an MFA in Glass from Tulane University. He works with designers on large architectural projects and has his own line of commercial and residential lighting. Since building his studio on Cape Cod in 1992, he has designed many unique glass pieces influenced by the nature of Cape Cod and surrounding bays and oceans.